SpaceX have seen great advances over the last few months in preparation of Dragon’s mission to the ISS. The partnership between companies is part of NASA’s Commercial Orbital Transportation Services program, which utilizes the services of the private space sector to get supplies to crew members at the International Space Station. The success of this unmanned mission will be a huge step in solidifying a new era in commercial cargo delivery.

Since the shutdown of the Space Shuttle Program this past June, NASA has focused there efforts on relying on other resources to 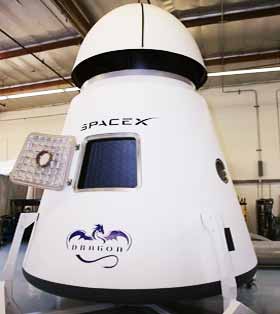 carryout there needs. Along with teaming up with SpaceX, NASA recently announced a multi-million dollar partnership with Virgin Galactic so they can continue to send people and cargo to space.

This isn’t something necessarily new for SpaceX though. They’ve already completed several successful missions including the launch of another Dragon spacecraft in last year. However, if it were to fail, it could result in a huge setback for the private space industry. The upcoming Dragon launch will test systems for future missions to approach and attach to the International Space Station.

“SpaceX is excited to be the first commercial company in history to berth with the International Space Station,” SpaceX President Gwynne Shotwell said in a statement. “This mission will mark a historic milestone in the future of spaceflight.”